Mrs Mary McGrath, Down & Connor President, Apostolic Work was a guest at St George’s Chapel, Windsor to receive the Maundy Money on Holy Thursday from the Queen.

Mary was nominated by Bishop Noel Treanor, Bishop of Down & Connor at the request of Bishop Alan Abernethy, Church of Ireland, Bishop of Connor.

‘It was a privilege to be nominated by Bishop Noel Treanor and Bishop Alan Abernethy, Church of Ireland. I was delighted to represent Apostolic Work. We had a great day, meeting the Queen and enjoying the lovely reception after the ceremony in Windsor Castle.’ 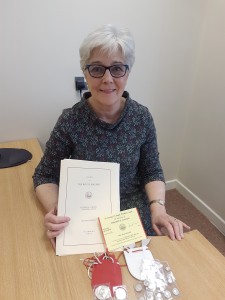 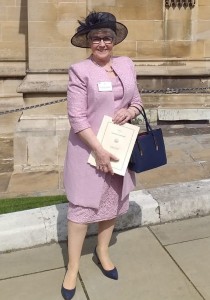 Mary McGrath, was born on the Falls Road, Belfast, in 1948 and joined Clonard Junior Branch of the Apostolic Work Society at the age of 10. The Society aims to help missionaries in Third World Countries.
Mary married Jim in 1972 and moved to Randalstown where she joined the parish branch of the Society. She has served on the Council of Apostolic Work and held the offices of Secretary and Treasurer before being appointed Diocesan President in 2017, a role which she still holds.
She also served on the Parish Pastoral Council for four years and is a Minister of the Word. Mary and Jim have five children and five grandchildren.

Mary McGrath was nominated by Bishop Abernethy, with the help of Roman Catholic Bishop Noel Treanor, as Bishop Alan wanted to reflect the excellent relationship that exists between the Diocese of Connor and the Diocese of Down & Connor.

Mary travelled to Windsor Castle with her husband Jim and another couple from Northern Ireland – Jim and Rosemary Patterson. Mr Patterson, a lifelong member of St Mark’s Church, Ballysillan had also been nominated by Bishop Alan Abernethy.

Jim and Mary were among 93 men and 93 women to receive the Maundy Purse this year.

Maundy money (Source: The Royal Mint)
The Royal Maundy is an ancient ceremony, inspired by The Bible. On the day before Good Friday, Jesus washed the feet of his disciples and commanded them to ‘Love one another’. By the thirteenth century the Royal Family was taking part in similar ceremonies. By washing the feet of the poor and giving money and gifts, they were showing humility and compassion.
When Henry IV became King, he introduced a new tradition, deciding to give the same number of gifts as his age. So, for instance, when the monarch was forty, he gave forty of his subjects Maundy gifts. It became the custom for the sovereign to perform the ceremony, and the event became known as the Royal Maundy.
The first Maundy money ceremony took place in the reign of Charles II, when the king gave people undated hammered coins in 1662.
The tradition of the king or queen washing the fee of the poor faded out in the eighteenth century, but the monarch still gave people food and clothing. By the nineteenth century the tradition had changed again, and the monarch gave people the Maundy money.

Congratulations to Mary from all of us at Apostolic Work!