‘Armagh Wells’ provide spring of hope for desolate families. The tremendous fundraising effort of Armagh Well Group through Apostolic Work has been helping rebuild lives in the Southern Philippines in the wake of a natural disaster. This ideas suggested by Jenny Toal has enabled five wells to be built. Fr Peter O’Neill SSC writes about the most recent one : – “On the night of December 15th 2012 exceptionally heavy rain fell in the mountains above Cagayan De Oro City on the island of Mindanao in the Southern Philippines. The floods came tumbling down the mountains and the river burst its banks. Two thousand homes were washed away, many more damaged beyond repair and at least 2000 people lost their lives. It is in this area that the Columban Fathers have worked for many years. The people were not allowed to rebuild their homes near the river. they had to relocate to safer grounds in the hills about 4 miles above the town with NO WATER ! With the help of the Columbans, these poor unforunate people were able to build 250 houses, but it is with the water project that “ARMAGH WELLS” came to the rescue. Now thanks to all who contributed to ‘ARMAGH WELLS’ there are now 250 homes and families in the area with WATER. One can just imagine their delight”. 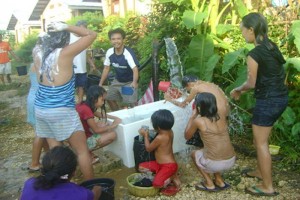 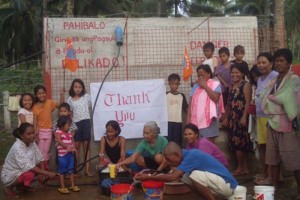